This site attempts to protect users against Cross-Site Request Forgeries attacks. In order to do so, you must have JavaScript enabled in your web browser otherwise this site will fail to work correctly for you. See details of your web browser for how to enable JavaScript. Skip to Main Content
It looks like you're using Internet Explorer 11 or older. This website works best with modern browsers such as the latest versions of Chrome, Firefox, Safari, and Edge. If you continue with this browser, you may see unexpected results.
Library - University of Liverpool
Big changes to your Library services this summer 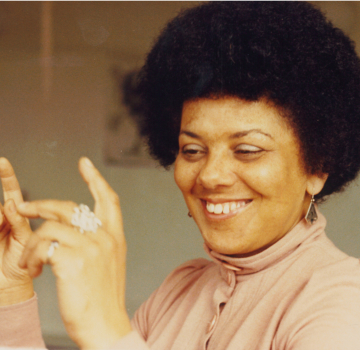 This year, the University of Liverpool renamed the Gladstone Hall of Residence after Dorothy Kuya. The decision to rename the hall was made in recognition of the strength of feeling evoked in our student community by the Gladstone family’s historic ownership of enslaved people, and their profiting from the transatlantic trade in enslaved people. The shortlist of nominations was made up of people who had a strong connection to Liverpool and reflected the theme of racial equality.

Dorothy Kuya was born in Liverpool in 1932 and grew up in Toxteth, L8, amidst one of the oldest British black communities.

Growing up, she experienced and witnessed first-hand the racial discrimination that led to her becoming politically active and joining the youth branch of the Communist Party of Great Britain. Kuya became a community champion and in 1968, campaigned with others in Toxteth against the then Labour government’s criteria for its ‘Urban Programme’ which was designed to fund projects such as employment and training opportunities where the immigrant population forms more than 20 per cent of the local population.  The campaign was successful in convincing politicians that the community’s lack of assimilation into British life was as a result of discrimination based on skin colour rather than factors such as language barriers.

Kuya had joined the newly formed Liverpool Community Relations Council in the mid 1960’s and helped to establish several community organisations in Liverpool, including a project which led to the first black Social Workers to be employed in Liverpool and the setting up of the Merseyside Caribbean Centre in L8.

She later moved to London, and co-founded Teachers against Racism in 1971.  She continued her work to promote racial and social equality, becoming involved in research into racial bias and stereotyping in children’s literature, and suggesting alternatives.  She was also a member of the National Assembly of Women, ensuring anti racism work was prominent in the organisation's activities and went on to become the general secretary.

In 1980 Haringey Council appointed Kuya as their first Head of Race Equality, working closely with Bernie Grant, the local MP and head of the council.

On her return to Liverpool in 1994, Kuya’s community work continued: as part of the Granby Residents Association, she was involved in a partly successful campaign to prevent the forced purchase and demolition of housing in L8 for redevelopment.

Kuya’s retirement saw her develop Liverpool History Slavery Trail Tours, where she discussed the growth of the city’s involvement in the transatlantic slave trade and its significance in supporting the British Empire. She also was instrumental in campaigning for and setting up the renowned International Slavery Museum, situated at the Albert Dock and advocating for a Slavery Remembrance Day, first held in 1999 and held annually since then every August 23rd. To honour Dorothy Kuya’s legacy the National Museums Liverpool has named the annual lecture ‘the Dorothy Kuya Slavery Remembrance Lecture’.

Throughout her years of activism, Kuya influenced and shaped antiracist work by working with local communities, as well as addressing structural racism and sexism by working with councils and various organisations.

In the words of her nephew, Paul Ogolo, Dorothy Kuya “was instrumental in shaping the International Slavery Museum and was a tireless anti-racism campaigner. She fought all her life against racial intolerance, and fought for the truth and justice. Her name should live on to educate and inspire future generations.

You can discover more about antiracism in our Antiracism collection and explore our specially-curated race equality in Liverpool  Dorothy Kuya collection and make suggestions to expand our collections. Also, visit the Sydney Jones Library to see our carefully chosen Dorothy Kuya book display. Further afield, Toxteth Public Library has Black interest collections that can be explored and borrowed. The Library is near to the University and is open to everyone.

Enter your e-mail address to receive notifications of new posts by e-mail.