A major collection comprising the working and personal papers of the poet and painter Adrian Henri (1932-2000). 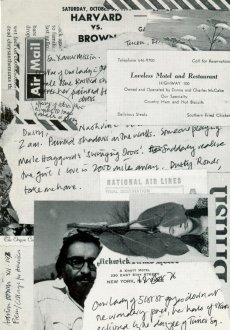 Adrian Henri was born in Tranmere, Birkenhead in 1932, and raised and educated in Wales. In 1957, two years after graduating in Art from the University of Durham, Henri moved to Liverpool where he lived and worked until his death. He became interested in poetry and jazz after meeting Roger McGough and Brian Patten in 1961, with whom he published his first collection of poems The Mersey Sound (1967). Between 1967 and 1970, Henri was the singer/poet with Liverpool Scene, a rock/poetry group. He was later President of the Liverpool Academy of Arts. A major retrospective of Henri's work was exhibited at the Walker Art Gallery, Liverpool in 2000.

The collection is virtually a complete record of Henri's work from the 1960s up to his death in 2000. It is significant in that it includes not only published material, in both completed and various draft forms, but also a large amount of unpublished material. The archive also includes many notebooks and diaries, television and radio scripts, material relating to exhibitions and teaching, printed ephemera and published material, including signed limited editions. The archive has an important series of personal and professional correspondence and also illustrates the work Henri did to promote Arts, specifically his work with the Liverpool Academy of Arts and schools across Liverpool and elsewhere.

The Papers were acquired by the University in two accessions directly from Adrian Henri in 1983 and subsequently from his estate in 2007. The second accession was acquired alongside the Papers of Roger McGough and the Papers of Brian Patten with aid from the Heritage Lottery Fund and grants from the Granada Foundation, the John S. Cohen Foundation, Coutts & Co

These collections are complemented by manuscript and printed collections for other Merseyside writers, such as Matt Simpson, and such major literary figures of the 20th century as Ted Hughes and Seamus Heaney.

Hearts and Haiku in the Adrian Henri Archive 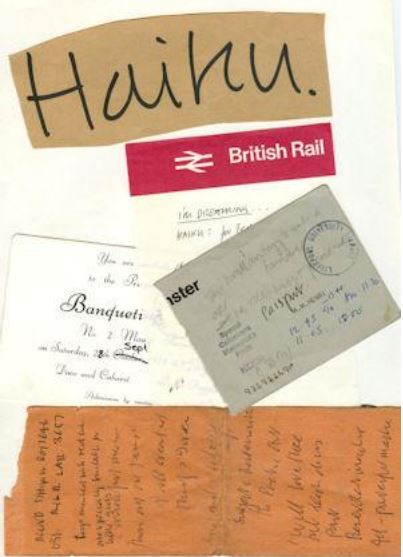 This bundle of manuscript and typescript drafts (Henri A/XI) was called ‘Four Haiku Six Haiku’ and the file has Henri’s own handwritten ‘Haiku’ label. This reflects Henri’s own arrangement of his archive.

Drafts of haiku, several with figures indicating the syllable count, have been written on assorted scraps of paper - a page from a British Rail notepad; the back of a printed invitation to the reopening of the Banqueting Suite at 2, Mount Pleasant; the cover of a chequebook torn in half.

The haiku include poems addressed to places or events as well as people: one sheet contains haiku labelled ‘For the General Strike’ (1926) and ‘for the River

Mersey’, which first appeared in a Haiku pamphlet privately printed by Anvil Press for Adrian Henri, New Year 1975. They were subsequently published in Henri’s Collected Poems, 1967- 1985 (Allison & Busby, 1986) with new artwork by Henri, including the Japanese-style Haiku heading (Henri/1/1/17).

One item from the file of artwork which was apparently not used in the Collected Poems is a simple painted pink heart. This echoes the anonymous painted pink heart, which was found in a file of postcards, photographs and drawings sent to Henri (Henri/7/6/2) 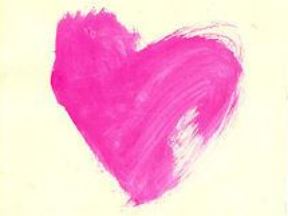