Brian Wilson Aldiss (1925-2017) is one of the major figures of British science fiction. After initially pursuing a career as a bookseller, Aldiss began writing in the mid-1950s. He published his first science fiction novel Non-Stop in 1958 and received the Most Promising New Writer award at the World Science Fiction Convention in 1959. Aldiss became a prolific writer of science fiction novels, novellas and short stories, continuing to win acclaim for his imaginative and fluid style. In 1962, he gained a Hugo Award for Hothouse (published in the U.S.A. as The Long Afternoon of Earth), followed by a Nebula in 1965 for The Saliva Tree and the John W. Campbell Award for Helliconia Spring in 1983.

Aldiss also became a leading figure in the study of science fiction, with Billion Year Spree (1973), revised as Trillion Year Spree (1986); and has branched out at various points in his career into mainstream contemporary fiction, plays and poetry. Yet, it is with science fiction that Aldiss remains most associated and through the quality of his fiction and non-fiction and his involvement with both science fiction organizations and the literary establishment, he has done much to promote the genre. He was awarded the OBE for services to literature in 2005 and an honorary Doctorate of Letters from the University of Liverpool in July 2008. 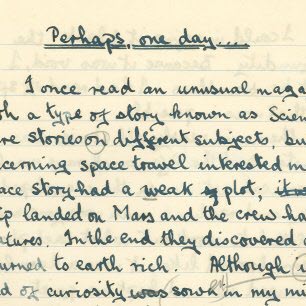 The Brian Aldiss archival collection at Liverpool spans the period 1943-1995 but, at 15 boxes, is merely a supplement to the main Brian Aldiss Archive at The Bodleian Library. The collection at Liverpool comprises manuscripts and typescripts of Aldiss' fiction, including several novels and scripts, thirty short stories and numerous poems. There are several boxes of non-fiction material, including autobiographical writings, essays, articles and notes for conventions and meetings. There are also sections of correspondence, press cuttings and miscellaneous items, including a small amount of artwork and audio-visual material.

The archive is fully listed and an online Brian Aldiss Finding Aid including further biographical information is available for browsing or searching.

All material in the Archive is available to scholars for consultation in the University Library's Special Collections and Archives Reading Room by prior arrangement. Please refer to visiting & using SC&A.

Search the SF Catalogue for our holdings of works by or about Brian Aldiss. A large number of offprints and cuttings about or by Brian Aldiss can also be found in our Offprints Collection.

The main Brian Aldiss Archive is held at The Bodleian Library. A collection of Aldiss' literary papers 1966-1995 can be found at Reading University Library, for which a collection-level description can be viewed on the Archives Hub. Other archival collections can be found at Dallas Public Library; The University of Kansas, Lawrence; Sydney University; Eastern New Mexico University, Portales; The University of California, Los Angeles (correspondence); The Huntington Library, San Marino, California (correspondence).