SC&A houses more than 7000 pre-First World War children's books from the former Education Library, including gifts from the collections of May Rathbone and the Gregson Institute.

Hesba Stretton (author of Jessica's First Prayer) is one of a group of 19th and early 20th writers whose prolific - and almost complete - output can be found in the children's collection.

Periodicals in the collection include The Monthly Packet (edited by Yonge), Aunt Judy's Magazine, and many Christmas annuals. Early school textbooks, including American imprints and material on physical education, sit alongside manuscript exercise books, particularly early 19th century mathematics books, books on the history of education (especially in Liverpool), and adult education material.

This collection (bought in 1973) is notable for tracts and chapbooks, books illustrated by Walter Crane (who was born in Liverpool) and Kate Greenaway, and also fairy tales, legends and myths.

A small collection of reprinted items from the Osborne and Lillian H. Smith Collections of early and modern children's books in Toronto Public Library.

The Noble collection includes 19th century illustrated books, and the Literary annuals collection has juvenile versions of titles such as Forget-me-not and The Keepsake. 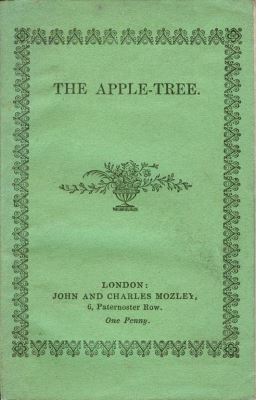 This miniature book from the children’s collection is shown here near actual size: 6.5cm x 10.5cm. Its size, price (1d, as announced on the front cover), and content puts it in the category of “children’s chapbook” – short moral tales aimed at children, an amalgam of the classic chapbooks containing tales of fable and adventure and the improving literature published in reaction to them. The main characters are brothers: Tom, “a nimble, black-eyed little boy” and Billy, “a little, pale, shy 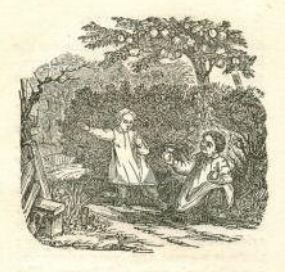 boy” whose appearance belies their relative moral courage, as revealed in a ‘scrumping’ twist on the biblical story of the Fall.

The Apple-tree was part of a bequest of children’s literature from May Rathbone (1866-1960), which includes a series of similar children’s chapbooks, with titles such as Amy’s Earnings, The Conceited Pig, The Donkey-Boy, The White Kitten and The Bunch of Violets. Neither the authors nor the dates of these are known, but the publishers, John and Charles Mozley, were part of a family of provincial printers-turned-publishers who were involved in producing children’s literature for over a century.

In 1788, George Fisher’s The instructor: or, young man's best companion (1788) was printed for J. Mozley in Gainsborough (Lincs), a printing business inherited by Henry Mozley (1773- 1845) early in the 19th century. By 1819, the business had expanded into publishing, for example Dr. Goldsmith's Roman history abridged by himself for the use of schools ‘printed by and for Henry Mozley, Derby, 1819’. ‘Dr Goldsmith’ being the wellknown novelist Oliver Goldsmith (1728-1774), author of The Vicar of Wakefield. Henry Mozley’s twelve children included several daughters: Anne (1809-1891), the essayist and journal-editor, and possibly Mary Lucas Mozley whose name (spelled Mosley) and the date ‘10th July 1824’ appears in an 1823 publication (not her father’s): Bird-catching; or The Northern adventures: being an account of several methods of taking birds in the Feroe Islands, and in some other places. Intended for children.

By 1828, the expanding business had taken on one of the Mozley brothers - The history of Greece, abridged for the use of schools by Dr Goldsmith has the imprint ‘Henry Mozley and Son’ - and a second by 1835, as shown in the imprint of Little Sophy: a true story for little children ‘Printed and published by Henry Mozley and Sons’. These two Mozley brothers, John and Charles, remained with the publishing business in Derby, publishing both religious and educational titles, for at least a decade: Lindley Murray’s Introduction to the English reader; or, a selection of pieces in prose and poetry, calculated to improve the younger classes of learners in reading was published in 1844, w

ith a Mozley catalogue of school books bound in at the front of the volume. These schoolroom books were evidently useful: a former child owner of Mozley’s 1834 Abridgment of Murray's English grammar ... designed for the younger classes of learners has left his name in his copy: “R. Dobson's Book Aged 11 November 7 1838.”

Anne Mozley’s editorship of Magazine for the Young (1842-) may have introduced her brothers’ firm to the novelist Charlotte Mary Yonge (1823-1901), later the first editor of their periodical publication, The Monthly Packet (1851-1899). John and Charles Mozley had a London address: 6 Paternoster Row (as on The Apple-tree) from 1849, which appears on many of Yonge’s stories, for example Leonard, the lion-heart (8th edn, 1870). The firm became ‘Mozley & Smith’ five years later, by the time this story was collected in The Christmas mummers and other stories (1876) and in 1879 Walter Smith succeeded to the business in his own right, expanding into Covent Garden and the Strand.

Formerly Rosebud: a monthly magazine of nursery nurture and amusements (1881-1914); from 1915 to 1925 Rosebud Annual. This copy has been decorated with a child's drawings of reindeer. SPEC JUV 674

Harry Paget the hero in 'For Glory and Renown'

Illustration for the first serial story in Chums (1892-1941), a weekly story paper devoted to tales of heroism and adventure across the British Empire. The first issue sold 100,000 copies. SPEC JUV 695