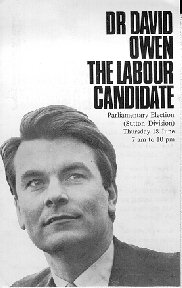 The collected papers of the Rt Hon the Lord Owen, former Chancellor of the University of Liverpool, cover his political career from his early Labour Party membership until his retirement as SDP MP for Plymouth Devonport. The main body of records date from c.1962-1995, although the collection also contains some earlier material relating to David Owen's family life and education.

Lord Owen's distinguished political career has encompassed service as British Foreign Secretary in the 1974-77 Labour government, foundation and leadership of the Social Democratic Party in Britain and co-chairmanship of the International Conference on Former Yugoslavia (1992-1995).

In 1960 David Owen, a medical student at St Thomas' Hospital, London, joined the Labour Party, inspired particularly by the politics and integrity of Labour Party leader Hugh Gaitskell, whilst also moved by the conditions of poverty and squalor which he was shocked to encounter during his hospital work in London. He was voted in as Labour MP for the Plymouth constituency of Sutton in the General Election of 1966, and rapidly became established as a politician of stature within the Labour Party, from his appointments as Minister for the Navy in 1968 and Minister of Health in 1974, to his position as Secretary for Foreign and Commonwealth Affairs, 1977-1979, serving as the youngest British Foreign Secretary since Anthony Eden in 1935. However his Labour career was also characterised by an unwillingness to accept the Party line when it diverged from his own firmly-held beliefs: in the summer of 1967 he wrote with colleagues David Marquand and John Mackintosh a tract challenging some Labour policies,Change Gear, and in April 1972 he resigned from the Shadow Cabinet over the Labour Party's refusal to support British entry to the EEC.

The publication of the Limehouse Declaration by David Owen and three other leading Labour politicians, William Rodgers, Shirley Williams and Roy Jenkins, on 25 January 1981, marks the culmination of his unwillingness to compromise his political beliefs for the sake of Party unity. The document was produced in response to the increasing dominance of Left-wing ideas and policies within the Labour Party, which included hostility to British membership of the European Community, support for unilateral nuclear disarmament and the introduction of an 'electoral college' to elect the Party leadership. It announced the establishment of a Council for Social Democracy to 'rally all those who are committed to the values, principles and policies of social democracy' and address the need for a 'realignment of British politics'. The result was the creation of a new party, the Social Democratic Party or SDP, officially launched on 26 March 1981. David Owen served as Deputy Leader of the new party from October 1982-June 1983, and Party Leader from June 1983-August 1987, but his efforts to steer the Party clear of a merger with its electoral allies, the Liberals, and retain its separate identity, were finally defeated by pro-mergerists in both parties in 1987. The continuing SDP was re-established under David Owen's leadership in March 1988, but suffered from diminished membership and failure to reach electoral agreement with the merged party, the Social and Liberal Democrats, and was finally wound down as a national party in June 1990. 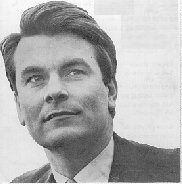 David Owen retired as MP for Plymouth Devonport before the General Election of April 1992, having become the longest-serving Plymouth MP., and although accepting a Peerage, initially directed his energies away from political affairs becoming involved in international business ventures and developing a humanitarian charity Humanitas. However, in September 1992, he was persuaded to take up the role of Co-Chairman of the International Conference on the Former Yugoslavia, working for three years towards the formation of a peaceful settlement in the conflict-torn region. He was installed as Chancellor of the University of Liverpool in July 1996.

Books relating to the SDP