The collections of E. Allison Peers contain nearly 300 books and pamphlets contemporary with the Spanish Civil War, with press cuttings, lecture notes and correspondence, relating to Spain during the Civil War and its aftermath, and to Peers's work on the Spanish Mystics. 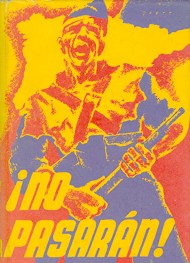 139 items on the Spanish Civil war from the library of Prof. E. Allison Peers (1891-1952) were presented in 1953 by Audrey Lumsden (Mrs. Kouvalites), his executrix, with additions in 1954. Many of these have inscriptions by Peers; letters and other insertions have been collected and rehoused with other papers at Peers Collection B/II/12. The chief collecting focus for additions to the Peers collection is contemporary pamphlets relating to the Spanish Civil War and its immediate aftermath. There is related material in the Ronald Fraser, E.J. Burford, Eleanor Rathbone and Manuel Irujo collections.

E. Allison Peers (1891-1952) was appointed Lecturer in Spanish at the University of Liverpool in 1920 and Gilmour Professor of Spanish in 1922. He was quick to recognise the importance of Spanish Studies in Great Britain after the First World War and in 1923 founded the Bulletin of Hispanic Studies, which included his column of contemporary analysis, `Spain, Week by Week'.

Peers was the author or editor of some 60 books, including Studies of the Spanish Mystics (1927-1930), The History of the Romantic Movement in Spain (1940) and translations of the complete works of San Juan de la Cruz and Santa Teresa, as well as The Spanish Tragedy (1936) and Spain, the Church and the Orders (1939). Under the pseudonym `Bruce Truscot', he published two controversial and highly influential books, Redbrick University (1943) and Redbrick and these Vital Days (1945).

There is an annual E. Allison Peers Symposium hosted by the Department of Modern Languages and Cultures at the University since 2009.