Some 3 300 pamphlets on the political and economic controversies of the reigns of James II, William III and Mary, Queen Anne and George I, including the Sacheverell trial for seditious libel in 1710 and the South Sea Bubble of 1720. 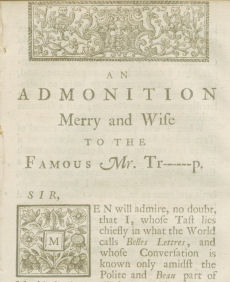 The political alignment of the pamphleteers is chiefly Whig and Tory, including Defoe, Addison, Swift and Steele, with some Jacobite voices such as Atterbury and Sheffield. Longer items (up to 120pp) include, for example, poems by Anne Finch, Countess of Winchilsea.

The collection builds on the strong representation of pamphlet literature of this date in the Library's main pamphlet collections - the Knowsley, Lancelyn Green and Thomson Collections, and in the general Special Collections sequences.

Records for 1685-1727 pamphlets can be browsed by decade in the Library catalogue: