This site attempts to protect users against Cross-Site Request Forgeries attacks. In order to do so, you must have JavaScript enabled in your web browser otherwise this site will fail to work correctly for you. See details of your web browser for how to enable JavaScript. Skip to main content Library - University of Liverpool Skip navigation 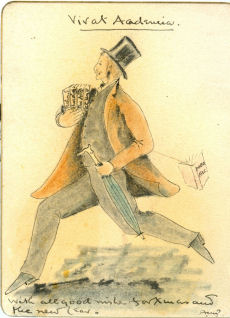 Canon Gerald Henry Rendall (1851-1945) was the first Principal of University College, Liverpool (1881-1897) and a Classical, Biblical and Shakespearean scholar, who bequeathed to the Library two separate collections of books and related material.

In addition to the book collections, Rendall's papers include manuscript notes, correspondence and cuttings about his work on Shakespeare, and on Marcus Aurelius Antoninus, and also Christmas cards, menus and invitations relating to social events in Liverpool 1880-1897.

In addition to the post of Principal, Rendall held the Gladstone Chair of Classics and Ancient History and found time to publish an acclaimed translation of the Meditations - Marcus Aurelius Antoninus to himself, with introductory study on stoicism and the last of the stoics (Macmillan, 1898). His research collection comprises 150 sixteenth-nineteenth century editions of Marcus Aurelius, particularly translations of the Meditations, and books and pamphlets relating to him and to the Stoic philosophy, some of which have Rendall's marginal notes.

Rendall retired in 1911 from his post as Headmaster of Charterhouse, for which he had left Liverpool, and settled in Dedham, Essex to indulge in literary pursuits. He published a series of books on Shakespeare which include Shakespeare sonnets and Edward de Vere (1930), Shake-speare: hand-writing and spelling (1931), Personal clues in Shakespeare poems & sonnets (1934), Ben Jonson and the First Folio edition of Shakespeare's plays (1939), The Ashbourne portrait of Shakespeare (1940) and Lord Oxford as Shakespeare. He bequeathed a collection of more than 100 books and pamphlets reflecting contemporary approaches to Shakespeare, many with his annotations and review cuttings.