5000 17th-19th century items from the Library of the Earls of Derby at Knowsley Hall, Lancashire. 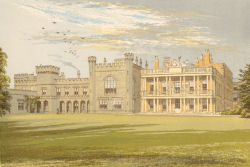 At the 1954 Christie's sales of books from Knowsley Hall Library, the University bought the beautiful 1465 Mainz edition of Cicero.

The University also acquired from Knowsley a good collection of the ordinary books of the period - divinity, politics, law, history, travel, astrology, popular medicine - including first editions of Milton and Dryden, and Robert Boyle's The Sceptical Chymist (1661).

The collection includes Civil War tracts, a unique copy of Propositions of Captain Ferentes (1622) and the 19th-century collection of Edward George, 14th Earl of Derby (1799-1869), three times Prime Minister, whose parliamentary career was summarised by Disraeli as "He abolished slavery, he educated Ireland, he reformed parliament".

British 19th Century Pamphlets Online includes pamphlets from the Library of the 14th Earl of Derby at Knowsley Hall, many of them sent by their authors to lobby him as prime minister.
SPEC Knows.pamph. 612(4)