A collection (established in 1970) of literary annuals, keepsakes and gift-books, published mainly in the period 1830-1850. 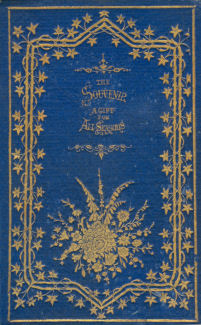 The first literary annual was Rudolph Ackermann's Forget me not for 1823, published in November 1822, to which numerous rivals in the market for "an elegant annual token of remembrance, friendship and affection" soon sprang up.

The fashion declined in the 1840s, virtually disappearing by 1860. The literary and artistic value of the contributions to annuals was described by Thackeray as "a little sham sentiment ... employed to illustrate a little sham art" but they exemplify the rapidly developing arts of book illustration, production and binding of the period.

In addition to the Liverpool poet Felicia Heman's contributions to Fisher's Drawing room scrapbook, there were Liverpool connections with The Juvenile keepsake, a present for all seasons, published by Edward and Henry Lacey, Liverpool; The sacred offering, a poetical annual edited in part by Mrs Jevon and printed by D. Marples & Co., Liverpool and The winter's wreath, printed by George Smith, Liverpool.

Juvenile annuals, including the gloomy Friendship's gift on the sorrows of orphans and bereaved mothers, are included in the Children's Books transferred from the Education Library.

Literary annuals and gift books were anthologies of poems, short stories and illustrations published in a volume annually. The Annuals were at their most popular 1826-1842. SCA contains some 200 volumes of literary annuals.

Although the texts featured in the spotlight are available to consult by appointment in Special Collections and Archives, links to external digitised copies are provided where possible. The digital copies and the affiliated websites are administrated by external providers and may require subscription credentials.

In November 1822 Rudolph Ackermann published Forget me Not for the year 1823 and started a literary publishing fashion which was to last until the 1850s. By 1825 there were already two rivals; in 1826 there were eight; in 1830 some forty three; in 1850 only eleven; and after 1860 the trend had virtually died out. 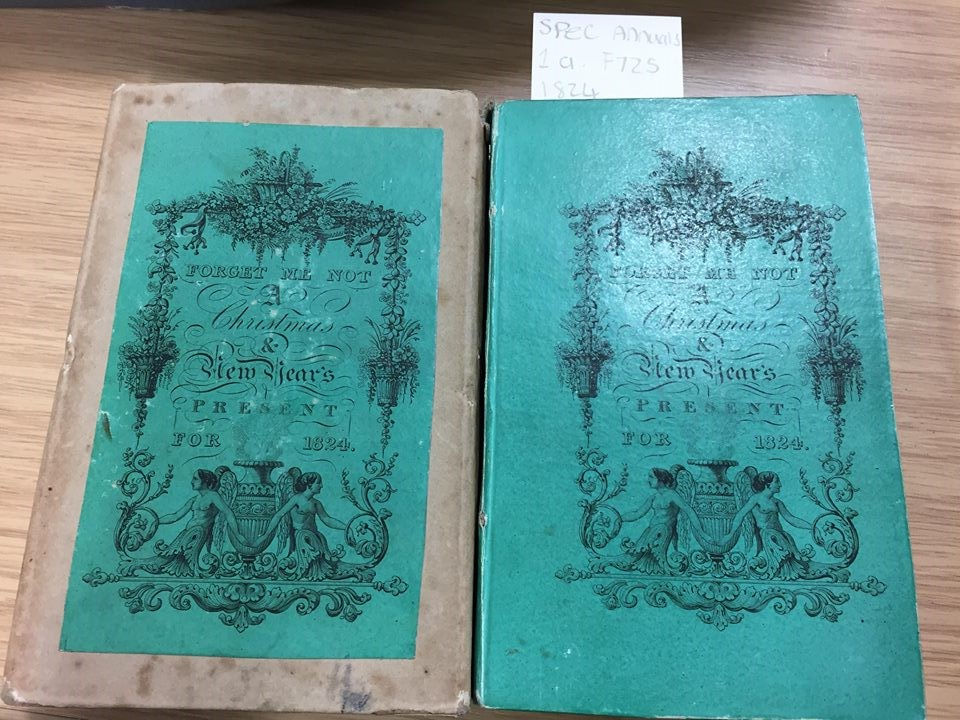 ​Ackermann, who was born in Saxony in 1764 and settled in London in 1795, had already made his reputation by being the first to introduce lithography as a fine art to England. Although there were German prototypes for this particular kind of combination of almanac and pocket-book, Ackermann's motives were strictly commercial - he felt that there was a market for elegant pocket-books for young ladies and he adapted the contents and make-up to the prevailing taste of this book buying class accordingly. With increasing competition came the need to improve the literary and graphic quality and the almanac section was dropped in 1824 when the Forget me Not became an 'elegant annual token of remembrance, friendship and affection' - and for the next twenty five years the Annuals were almost entirely belles-lettres publications. 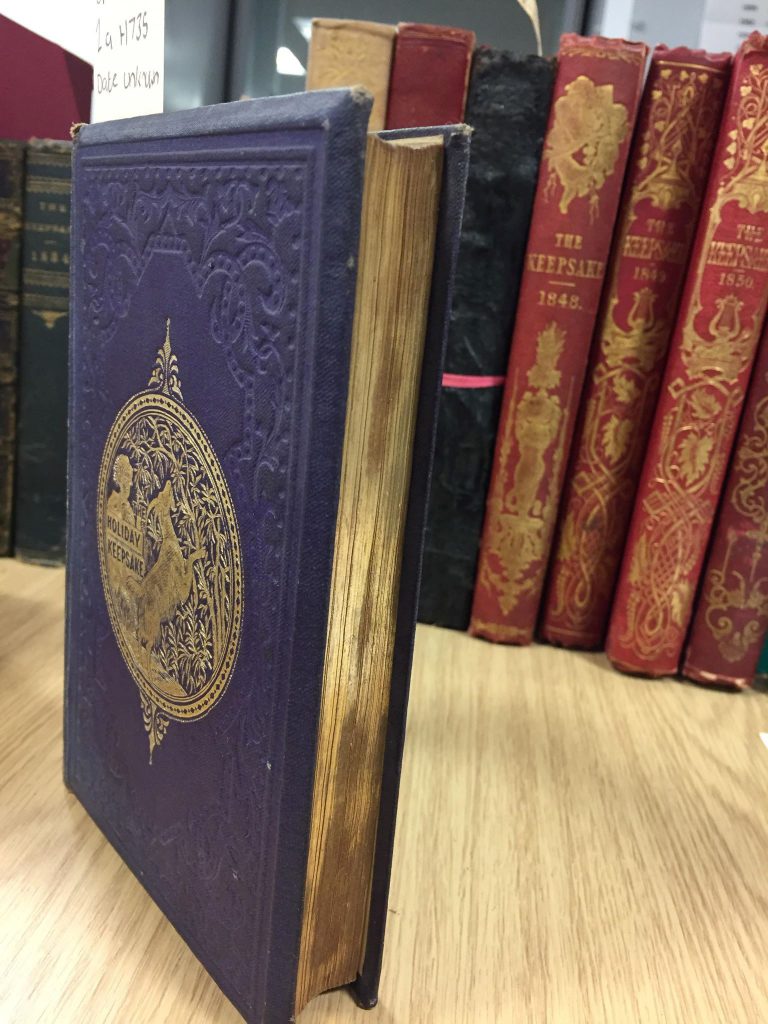 Like modern annuals, they were released late in the year and dated for the following year. This meant that they proved to be popular Christmas gifts. And, although they were popular, the Annuals met with a good deal of critical disapproval, notably Thackeray's in Fraser's Magazine, December 1837, "a little sham sentiment is employed to illustrate a little sham art".

A change took place in the 1830s from the pocket Annual to that intended for the drawing room of boudoir, a change that is reflected in the contemporary increase in the number of novels dealing with fashionable life and high society. The proprietors of the Annuals were quick to cash in on the increasing demand from the middle classes to learn about the new code of manners, modes of dress, and styles of conversation. The contributors to the Annuals now included aristocratic names and the editors were titled ladies. The engravings were now scenes from nature, aristocratic mansions and idealised portraits of nobility, and the Annuals were now tables in quarto format.

There were a number of factors which caused the slow decline of the Annuals in the 1840s: one was the enormous increase in the cost of production, then there was the general slump in the book trade of 1842; the hostility of the reviewers who persuaded the public of the low literary level of the annuals; the competition of American Annuals; and the face that the Annuals could not compete in public interest with the serials in the new monthly magazines.

The Annuals demonstrate the rapidly developing arts of book illustrations and book production during the 19th century. It is clear that the annuals were predominantly popular due to their bindings and book plates; the annuals were often very beautiful and kept in good condition.

As they were published over a significant period of time, there is also a clear development in the way they were bound. Silk was introduced as a binding for one of the first times, morocco leather covers were increasingly used for durability, colour and embossed designs were introduced throughout the period, and gold was used extensively with most of the annuals having golden gilt-tooled and gilt-blocked designs and gilt edges. The sizes of the annuals also varied - with the scrapbook and cabinet annuals being larger for display, and the smaller annuals being pocket-sized. The literary annuals were innovative; using steel plate engravings etc., the standard gradually grew as audience’s desired the most attractive books to display.

The souvenir: A token of remembrance. Classmark: SPEC Annuals 1a.S725.

The Souvenir’s each have their own unique design – each as lavish as the others. The 1848 copy is particularly interesting with its red and black striped design; this colour scheme/pattern is not seen across the other annuals and is quite unique. The purple of the 1853 edition and the orange of the 1850 edition are more typical. These annuals also feature colourful book plates inside; they are very vibrant and bright considering their ages. 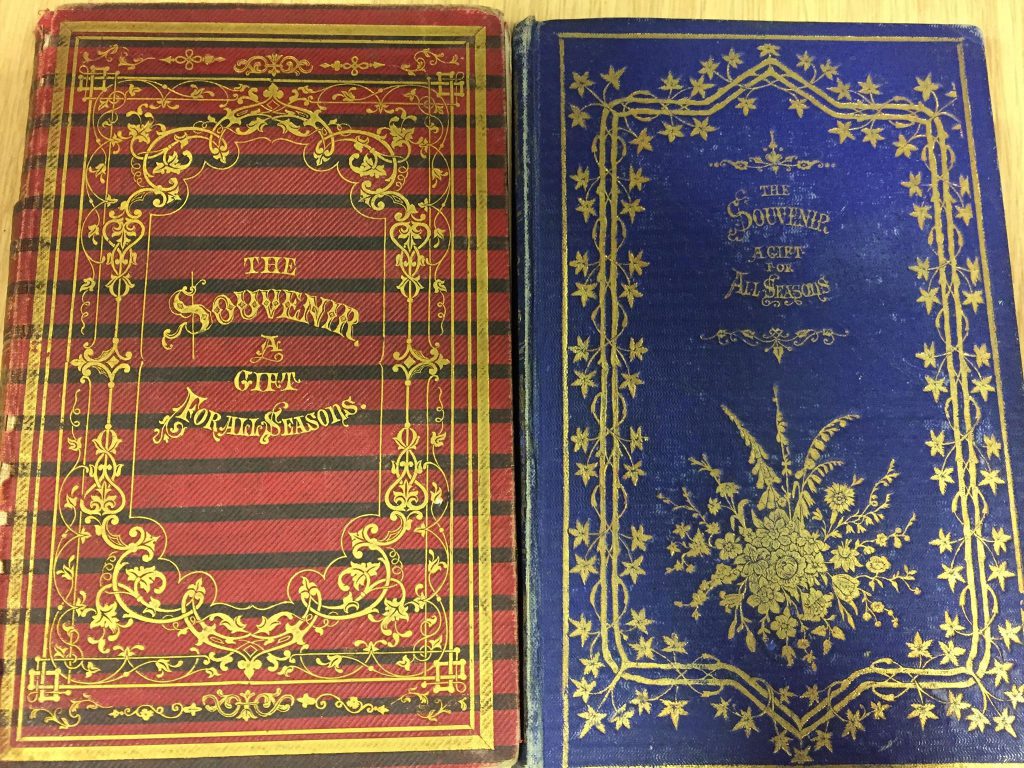 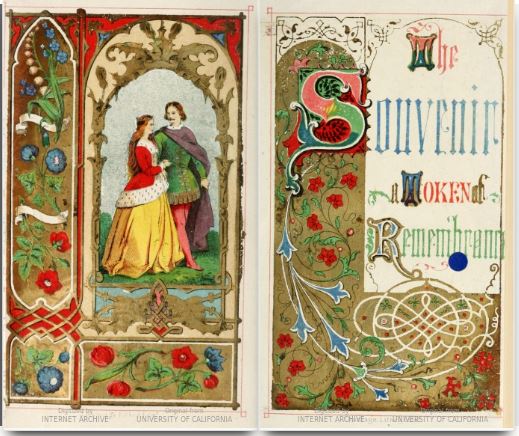 The literary annuals were typically targeted as gifts for young women. This is evident in the inscriptions, as many of the annuals in the SCA collection have been dedicated to women; family members, friends, and often potential lovers. Poet Robert Southey even claimed in 1828 that "the Annuals are now the only books bought for presents to young ladies”, and while male authors may have disparaged their literary worth, they influenced the publishing market due to their popularity.

This 1831 volume of The Gem held in SCA appears to be an example of a New Year’s gift. There is a handwritten inscription in ink which reads 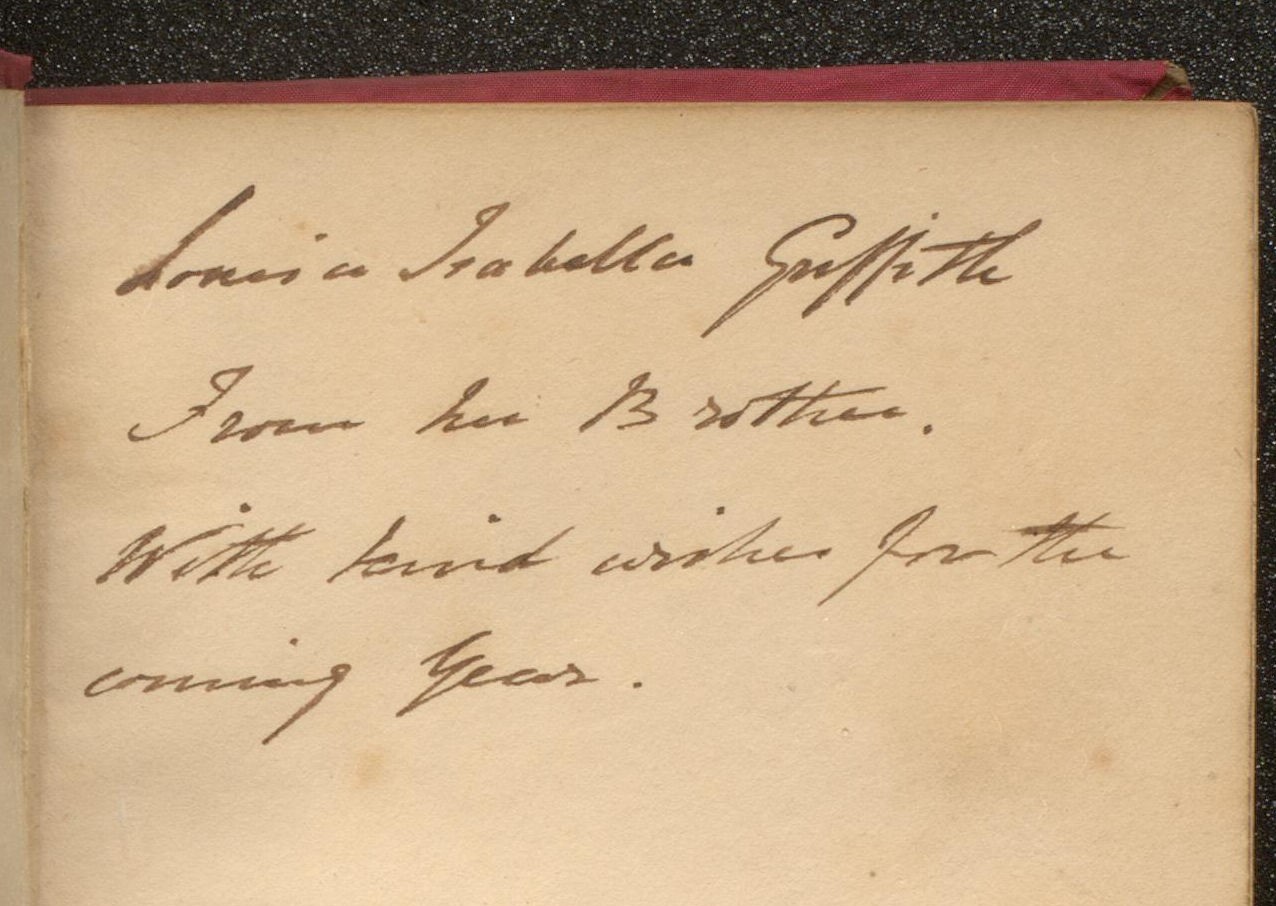 ‘Louisa (?) Isabella Griffith, from her Brother. With kind wishes for the coming year.’ There are also other inscriptions on different pages in the book; this annual was clearly gifted more than once. Many of these inscriptions also conform to the idea that family members often bought these for a female audience.

Other examples from the SCA collections include the inscriptions within The Gift Book of English Poetry (1859) Classmark: SPEC Annuals 1a.G455, which link the annual to the daughters of Richard Cobden. This is particularly interesting when considering the role of gender in the marketing of these books, as several of the Cobden daughters were involved in politics and were key figures in both the suffragist and suffragette movements.

Other clear dedications to women include The Christian keepsake and missionary annual (1835-1840; 1850) Classmark: SPEC Annuals 1a.C555, one of the several entirely religious-based annuals in the collection. The 1837 volume held in SCA features an inscription from an uncle to his niece: ‘To Miss Isabella Beckwith, from her affectionate Uncle. Stockton, January 1837.’ 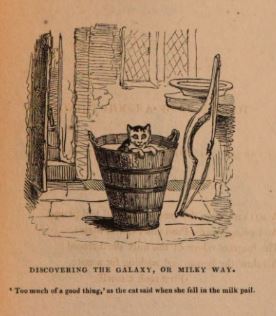 Aside from targeting the female audience, many of the annuals were also written/edited by women. For example, The Comic Offering (1831-4) Classmark: SPEC Annuals 1a.C735 was the first British humour publication entirely by a woman – written, illustrated, and edited by Louisa Henrietta Sheridan. It was initially considered unusual and not proper of a woman to write a humour annual but the series was popular and grudgingly accepted by male humourists. Other authors included Letitia Elizabeth Landon (LEL – poet), Frances Burney (author of Camilla and Evelina), and the Countess of Blessington.

Image: an illustration of a cat in a milk pail, titled "discovering the galaxy, or milky way: 'too much of a good thing', as the cat said when she fell in the milk pail" (The Comic Offering, volume 1, 1831, p. 127). This illustration accompanies a poem.

Women played an important part in the later Annuals. Seven annuals were run by women who contributed at least half of the literary content: Miss Hemans and Miss Landon (Fisher's Drawing Room Scrapbook) dominated the early years, and Lady Blessington (Heath's Book of Beauty ; Keepsake) were the most successful of the aristocratic editors in the later years. 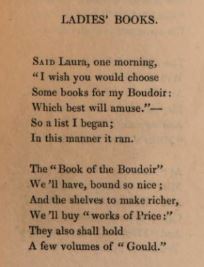 The editors of the Annuals secured contributions from most of the eminent men of letters of the day: Wordsworth, Coleridge, Thackeray, and Dickens. Far more typical verse was written by Charles Swain, Thomas Pringle, and L.E.L (Laetitia Elizabeth Landon), one of the most prolific of the writers for the Annuals.

Although social problems formed the subject of quite a number of verses, they were usually the occasion only for sentimental piety. The extolling of domestic love and virtues and the recounting of pseudo-medieval romantic verse tales were the chief themes.

Image: The poem Ladies' Books featured in The Comic Offering (1831, p. 97). ​It perfectly captures the desire of young ladies to fill their libraries with the appropriate works.

Authors were engaged at the same time as the best-known artists and engravers. Poems and stories were written to illustrate the plates and only 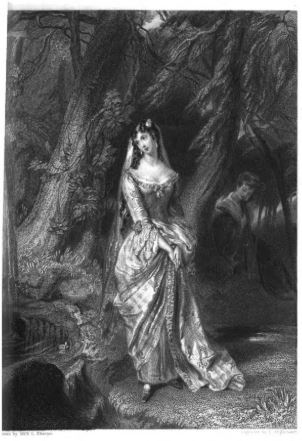 very occasionally the other way round. They were very expensive books to produce, mainly because of these plates which cost far more than the letterpress: a well-known engraver could ask up to 180 guineas for a single plate; in a report in the Gentleman's Magazine it was calculated that the Keepsake for 1829 cost 11,000 guineas to produce.

Image: Plate 'Flora' from the story 'The Brother and Sister', The Keepsake, 1833. Digitised versions of The Keepsake (by Princeton University) available via the Hathi Trust.

The Keepsake was perhaps the most popular series of literary annuals with over 30 volumes and many other imitations and related series. The 1833 volume held in SCA includes a particularly nice inscription. There is a handwritten inscription inside a presentation stamp which appears to read ‘B.L. to S. E. H. … 1893’ and underneath a poem has been added: ‘Long shall my care this dear memorial save. The friend who gave it rests within the grave’. This is a beautiful addition and indicates that the original giver has died between the date this was gifted and when this new inscription was added. 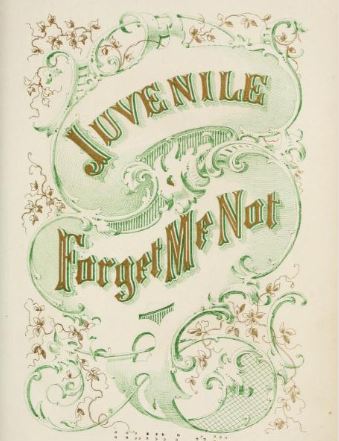 In their literary content the Juvenile Annuals kept closely to the pattern set by the general run of contemporary books for children, e.g. Mrs Sherwood's The Fairchild Family, where instruction is given under the guise of amusement. A common theme is the condemnation of cruelty to others and to animals. They share the decorative features of the adult Annuals. 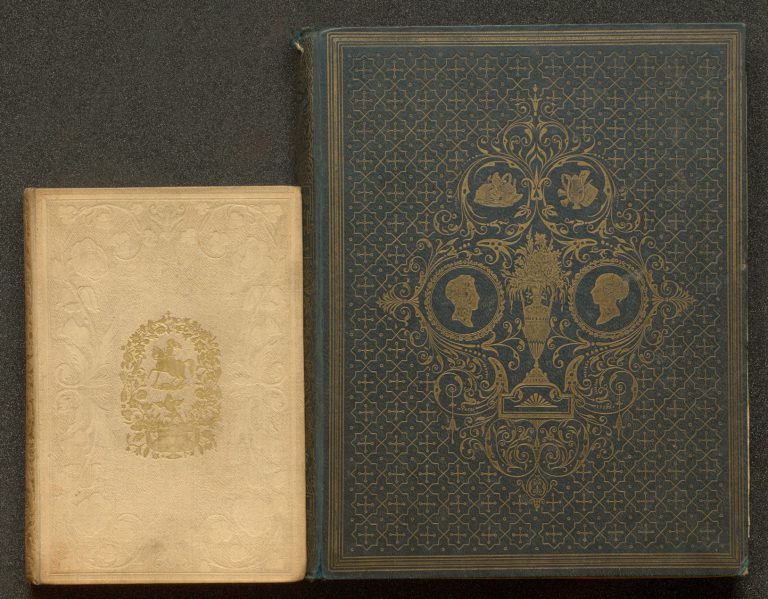 This image shows the size difference between the juvenile version of the text (left) and the version intended for the older audience (right).

The copy of Fisher’s Drawing Room Scrapbook (volume 8, 1839) held in SCA features a printed dedication: ‘To Agnes, "Gifts are the beads of Memory's rosary whereon she reckons kind remembrances of friends and old affections." L.E.L (the author)’ which is potentially referring to the editor of the Fisher’s Juvenile Scrapbook (Agnes Strickland). There was a clear community of female authors and editors who produced the literary annuals and shared a camaraderie.