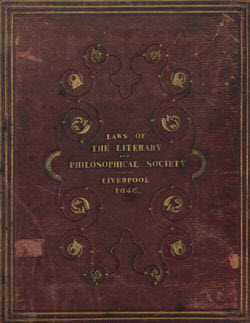 The Library of the Lit and Phil, one of the city's oldest learned societies, exchanged publications with other learned societies, and contained many 19th century scientific works presented by their authors, for example Sir William Hamilton's Lectures on Quaternions (1853).

Papers read to the Society include Thomas Baines's account of disease in the potato crop in 1845 and Joseph Dickinson's Flora of Liverpool of 1851.

The Society's Library, not now housed together, was transferred to University College Liverpool in 1899. Printed material relating to the Society includes: