A gift to the University from an anonymous private collector in the summer of 2006, the Peninsular War Collection consists of more than 250 volumes relating to the Peninsular War, the battle of Waterloo and the training and discipline of the British army in the early nineteenth century. 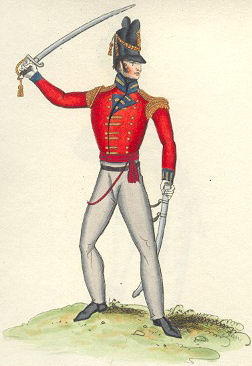 The Revolutionary and Napoleonic Wars of 1792-1815 have rightly been judged to have been the first conflict of the age of literacy, and, for that matter, the first literary conflict.

Conscious that they had played a part in a great historical epic, and aware, too, that there was a considerable market for their tales, large numbers of men who had served under the Duke of Wellington in Portugal, Spain, France and Belgium wrote their memoirs or edited private journals or collections of letters for publication.

The result is a mass of material that is of great value for the study of not just campaigns and campaigning in the Napoleonic era, but also popular resistance to the French empire and the social history of the British army and the analysis of popular and élite attitudes towards subjects as varied as masculinity, Roman Catholicism, cruelty to animals, Iberian society and the Emperor Napoleon.

It is works of this sort - amongst them the recollections or journals of Anton, Bell, Blakinson, Boothby, Bragge, Cadell, Chesterton, Cooke, Fernyhough, Gordon, Grattan, Henegan, Jackson, Knowles, Leslie, L'Estrange, Mackinnon, Milburne, Morley, Neal, Patterson, Rice, Steevens and Surtees - that constitute the bulk of the Peninsular War collection, but the latter also contains a variety of manuals and guides relating to the training and discipline of the British army in the early nineteenth century, as well as a number of miscellaneous items such as the memoirs of a British volunteer who fought in the Portuguese civil war in the 1830s, the recollections of several British diplomats and a complete set of the 11 sheets of John Stockdale's new military map of the Iberian peninsula, 1812 (SPEC Peninsular 210).