The most significant holdings of private press books in the collections are found in the William Noble and Walter Lyon Blease collections, which jointly span the 1880s to the 1950s. 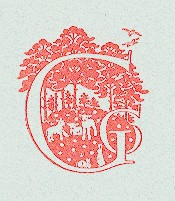 The Ashendene, Dun Emer/Cuala, Doves and Vale Presses are also well represented. Noble's contemporary, John Fraser (1836-1902), collected and sold Kelmscott Press titles, but retained the ephemera; his collection also complements Noble's in its holdings of books and ephemera from the Essex House Press (1898-1909).

The gift of books from the collection of Prof. Walter Lyon Blease (1884-1963) significantly enriches the Library's holdings of the great presses of the inter-war years, particularly the Golden Cockerel, Nonesuch, Shakespeare Head and Gregynog Presses. Other presses of this period, for example the Hogarth and Seizin Presses, are represented incidentally in the Graves collection.

Purchases and gifts supplement and extend these collections, including works from later British and American presses such as Gwasg Gregynog, the Rampant Lions Press and the Whittington Press. Browse catalogue records by name of press.

The William Noble Collection featured in the past Special Collections and Archives exhibition Charles Ricketts and the Vale Press, 1896-1903. For more information see the exhibition catalogue page.

The Kelmscott Press features in the Special Collections and Archives blog, Manuscripts and More. Read the blog post K is for Kelmscott here.

Arthur Joseph Gaskin (1862-1928) was one of The Birmingham Group in the Arts and Crafts movement with strong links to William Morris and his Kelmscott Press. This work was printed in 125 copies only at The Birmingham Guild of Handicraft. JUV.566