A major collection comprising the papers of the poet, playwright and children's writer Roger McGough (1937-).

McGough was born in Litherland in Liverpool, and after attending the University of Hull where he read Geography, French and Education he worked as a teacher in Liverpool, before joining the music/poetry group the Scaffold (1963-1973). McGough's poetry was first published, with work by Adrian Henri and Brian Patten in The Mersey Sound (1967). McGough has published many poetry collections and books for children, amongst which are; Selected Poems 1967–1987 (1989), You at the Back: Selected Poems (1991), The Kite and Caitlin (1996), The Bee's Knees (2003) and his autobiography Said and Done. McGough was awarded an OBE in 1997 and a CBE in 2004 for services to literature. In 2001 he was honoured with the Freedom of the City of Liverpool, along with Adrian Henri and Brian Patten. McGough remains a prolific writer and performer, producing poetry collections, plays and works for children. He is also a broadcaster and presenter of for BBC Radio 4. 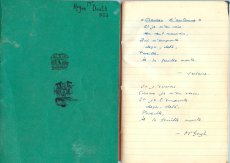 The archive gives much insight into his working practices and includes manuscript drafts and notebooks, corrected typescripts, galley proofs, correspondence and other printed material relating to his published works. There are a number of printed works, including signed, limited editions, and many audio and video recordings of poetry readings and performances, and television and radio appearances.

Much material relates to The Mersey Sound, first published in 1967, and to the comedy, poetry and musical performances of The Scaffold, The Grimms and the Liverpool Scene of the 1960s and 1970s. The collections also include ephemera, from photographs and publicity material to press cuttings.

The Roger McGough archive was acquired in 2007, with the archives of Adrian Henri and Brian Patten, by funding from the Heritage Lottery Fund. These collections are complemented by the Library's manuscript and printed collections for other Merseyside writers, such as Matt Simpson, and such major literary figures of the 20th century as Ted Hughes and Seamus Heaney.