Greenbank and other Rathbone properties

Greenbank was the Rathbone family house and estate in Liverpool. The house became central to Rathbone family life and afforded hospitality to numerous eminent public figures associated with the family. 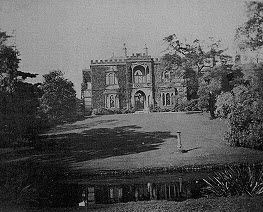 The original house was built in the early eighteenth century on part of the Toxteth Park estate. In 1788 the house and an estate of 24 acres was leased by the Earl of Sefton to William Rathbone IV, as a country retreat for his young family. The freehold of the property was purchased in 1809, the year of William Rathbone IV's death, and following his death substantial alterations were made to the building by Hannah Mary, his wife, in accordance with his wishes. These involved the re-building of a large part of the property in 'Strawberry Hill' Gothic style.

William Rathbone VI records in his memoirs Hannah Mary's notable addition of a fine cast iron screen to the south face of the house to form a verandah and balcony, writing that:

"her brother or father [Richard or Joseph Reynolds] , then of Colebrook Dale, gave her the iron verandah on the lawn side of it, which was made at their work [Coalbrookdale iron works, Shropshire]". William Rathbone VI A sketch of history during four generations,1894, p.22

Derby Hall was built on part of the land (opened in 1939). During 1939-1948 remaining parts of the estate were donated by Hugh and Emily's children. The house itself had been requisitioned by the Admiralty in 1940, but in 1944 it was also given to the University, originally for the purpose of housing students, but in the early 60s converted for use as a student and staff club house.