A major collection comprising the working papers of the poet and writer for children, Brian Patten (1946-).

Brian Patten was born in Liverpool and educated at Sefton Park Secondary Modern School. He began to attend and perform poetry at various Liverpool venues, during which time he met Roger McGough and Adrian Henri. In 1962 Patten began to publish his poetry magazine Underdog, in 1967, along with Henri and McGough he published The Mersey Sound, followed by his first major solo poetry collection Little Johnny's Confession. In 1970 published his first book for children The Elephant and the Flower. Amongst his many published works since are various anthologies, including Love Poems (1981) and Storm Damage (1995), and works for children including Thawing Frozen Frogs (1990) and The Magical Bicycle (1993). He has also written extensively for the stage, television and radio. He has won several awards, including an award from the Mystery Writers of America Guild for Mr Moon's Last Case (1975). In 2001 he was honoured with the Freedom of the City of Liverpool, along with Henri and McGough. He is Fellow of the Royal Society of Literature and of Liverpool University and John Moores University, Liverpool.

Patten lives in Devon and continues to write and perform his poetry. He is writer and presenter of the BBC Radio 4 series Lost Voices. 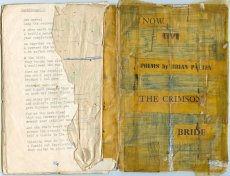 The archive includes manuscript drafts and notebooks, corrected typescripts, galley proofs, correspondence and other material relating to his published works. There is a small but significant series of early handmade typescript poetry booklet featuring Patten's early work and which are precursor's to his later published magazine Underdog, various copies of which also feature in the collection. There are a number of printed works, including signed, limited editions, and many audio and video recordings of poetry readings and performances. Much material relates to The Mersey Sound. The collections also include ephemera, from photographs and publicity material to press cuttings.

The Patten collection was acquired in 2007, with the archives of Adrian Henri and Roger McGough, using Heritage Lottery Fund. It is complemented by manuscript and printed collections for other Merseyside writers, such as Matt Simpson, and such major literary figures of the 20th century as Ted Hughes and Seamus Heaney.