"My ambition is to have in the G.L.S. one authority on every necessary subject, and to promote collaboration .. Then I wouldn't need to know anything, and all my duty would be to send postcards 'Consult Mr. ------.'" 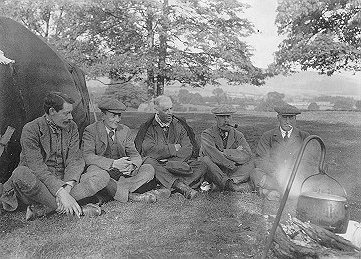 Robert Andrew Scott Macfie was educated at Cambridge, Edinburgh and Göttingen Universities before joining the sugar refining business which his family had owned and operated in Liverpool since 1788. He spent a short while abroad while serving in the army but returned to Liverpool to become one of the first members of the distinguished University Club there. His association with the University Club brought him into contact with the group of brilliant scholars who were at that time building up the University College, a number of whom were also keen Gypsiologists. Amongst his friends in this group were the noted Celtic scholar from Germany, Kuno Meyer, Consul Harald Ehrenborg, the Swedish Gypsiologist and John Sampson, the Librarian at the University of Liverpool, as well as the artists Augustus John and Robert Anning Bell. It was through Sampson that Macfie became interested in Gypsy Studies and the Romani way of life.

In 1907 John Sampson and fellow gypsiologist David MacRitchie persuaded Macfie to revive the Gypsy Lore Society which had been defunct for the previous 14 years. The letter books held in the GLS archive show the commitment and persuasive talent for friendship Macfie brought to the cause, and he remained until his death in 1935 the inspiration and driving force behind much of the valuable research work published in the Journal of the Gypsy Lore Society.

Macfie became one of England's leading authorities on Roma/Gypsies and their language, recording vast quantities of dialect, folk-tales and songs from various bands of Roma/Gypsies in Britain, including the Lovari or "German" Gypsies who visited England in 1906 and the "Coppersmith Gypsies" who came into the country in 1911, and stayed in the Liverpool area. Macfie's Gypsy coppersmiths in Liverpool and Birkenhead (1913) records this visit, during which he became godfather to one of the children, born in the drill-hall in Birkenhead.

In the summer of 1913 Macfie travelled through Bulgaria in the company of a band of Gypsy horse-dealers, an adventure he wrote up as "With Gypsies in Bulgaria". Macfie fought with the Liverpool Scottish regiment during the First World War and retired from the family business on his return to go and live at Hawes on the Yorkshire Moors. On his death he bequeathed his collection of works about Romany and Gypsy Lore to the Gypsy Lore Society.