"I want it to be clear that I am not giving this as a charity but as a small and inadeqate contribution towards the payment of the debt which we as a nation owe these men and which we have done so little to pay"
(May Rathbone on giving £1000 for ex-servicemen, 1946) 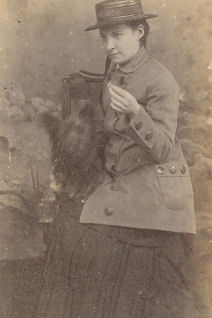 May qualified as a doctor at the turn of the century and worked at Alder Hey Military Hospital and St John's Hospital, Lewisham. She was also a botanist and keen mountaineer, making frequent visits to Norway. Her many gifts to the University Library include manuscripts, early printed books and children's literature, many in memory of her aunt, Catherine Laura Johnstone (1838-1923).

May Rathbone in the Rathbone Papers