An exhibition in co-operation with the University's School of the Arts, and School of Histories, Languages, and Cultures to mark the bi-centenary of the Liverpool Royal Institution and William Roscoe's opening address at its Colquitt St building on 25 November 1817. 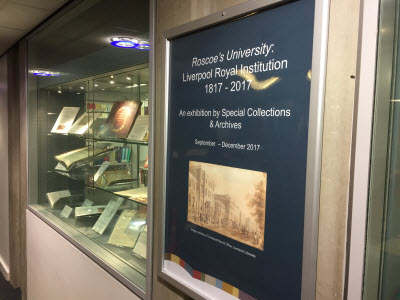 Their 1814 Detailed Plan envisaged a 'School, Public Lectures, facilities for Societies, Collections of Books, Art, and Natural History, a Laboratory and other Apparatus', and meeting rooms for the Proprietors, the plan's financial backers.

The new Institution drew on the cultural impetus Roscoe and his circle had given Liverpool during  the late 18th century - founding the Athenaeum, Literary and Philosophical Society, Lyceum, Liverpool Academy and Botanic Garden - in the service of “promoting the increase and diffusion of Literature, Science and the Arts”.

The Institution opened in 1817 and developed throughout the 19th century into "the nucleus of a modern University College, with separate Faculties of Medicine, Science and Arts”.